Shares
Like
Tweet
Email
Don't Miss
Free Subscription To the Freshest Health News And Tips
Hide this
Home   >   Cancer   >   prostate cancer   >   What is Prostate Cancer and What Causes It?

What is Prostate Cancer and What Causes It? 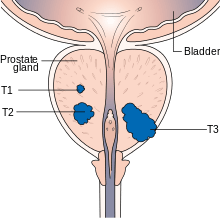 Prostate cancer, like any other cancer, occurs when healthy cells begin to change (mutate). They then multiply out of control, leading to a mass or tumor.

This disease deserves a little more attention, as it is perhaps the biggest concern for men. According to the World Cancer Research Fund International, the total diagnoses are at 1.1 million in 2012. Prostate cancer accounted for roughly 8 per cent of all new cancer diagnoses. In addition, it accounts for 15 per cent of cancers in men.

In many Western countries, prostate cancer is one of the most common cancers. Furthermore, it remains a leading cause of cancer death. The highest rates of this condition can be found in the United States, especially among black men. China has some of the lowest rates of prostate cancer.

What is the prostate?

What problems can develop with the prostate?

If the prostate swells and enlarges, the condition is called prostatitis. This can cause deep pain within the pelvis all of the time, or during urination or ejaculation. This can be painful and spread to other parts of the pelvis. The prostatitis can also be due to an infection.

Benign Prostatic Hyperplasia (BPH) or enlargement (BHE) is a condition that affects men mostly over the age of 50. The prostate enlarges and if it’s sufficient to squeeze the urethra that passes through the prostate, difficulties with urination can occur.

Prostatodynia is a longstanding chronic prostate disease. There are usually no signs of infection or inflammation, although pain and discomfort can be felt in the pelvic region area.

Prostate Cancer is one of the four disorders of the prostate that can be potentially life threatening. Many can also develop without any apparent symptoms. An estimated one man in eleven will develop prostate cancer in their lifetime.

Prostate cancer happens when the cells in the prostate start to reproduce more rapidly than in a normal prostate, resulting in a swelling or a tumor. Unlike BPH however, the prostate cells break out of the prostate and begin to invade other areas of the body such as the bones and the lymph nodes. The result is secondary tumors  known as metastasis. Once this cancer escapes from the prostate treatment is still possible but a ‘cure’ is impossible – at least according to the medical world.