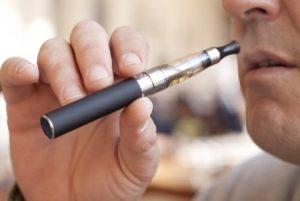 E-cigarettes emerged as the ‘healthier’  to enjoy smoking. Compared to traditional cigarettes they seem like the more convenient way to smoke. However, new research from The University of Manchester indicates that e-smokers or those who enjoy ‘vaping’ are at risk. They can result to more dangerous levels of lung inflammation in the long term. This is because of the chemicals in e-cigarettes, including formaldehyde and acrolein. These chemicals are also in traditional cigarettes.


The university study looked at three different brands of e-cigarettes. It examined any effects that vaping had on the white blood cells of 10 non-smokers and found that vaping raised cell activity. The response to e-cigarette exposure was similar to the results observed in traditional cigarette smokers. The observations were of Chronic Obstructive Pulmonary Disease, a debilitating lung condition.

Recent figures from Britain indicate that vaping is on the rise. The number of people trying e-cigarettes rose from 8.9 per cent in 2012 to 15.5 per cent in 2014. Most of those vaping were already smokers. However, the results also show that the number of non-smokers vaping rose during this period too.

Many trade authority figures want to cite that e-smoking is considerably less harmful than traditional smoking. This downplays any of the associated risks while stating that it is considerably healthier.

Tom Pruren, the Chief Scientific Officer for the Electronic Cigarette Industry Trade Association explains the large number of studies done on cell cultures. These studies indicate that the vapour from e-cigarettes is often less harmful than smoke. He also cited a recent study exposing people to e-cigarette vapours for 8 weeks or longer. The results found that exposure to cigarette smoke killed many of the cells within a 24 hour period. The experiment couldn’t run for longer, however.

The danger of trivialising these findings is that it simply provides another addiction to get hooked on, instead of removing the cause. The fact that e-cigarettes are not safe should be clear to understand. There is no real ‘healthy’ way to enjoy smoking.

Inhaling smoke is breathing in thousands of chemicals into the lungs that cause inflammation. The result in the long term is difficulty in breathing. As the lungs start to work less efficiently, less oxygen gets absorbed into the bloodstream. The body is then unable to perform optimally. Therefore, self-healing becomes more challenging, as the body fights to remove the inflammation.

There is no way to stay healthy while inhaling these dangerous chemicals. They only add more inflammation into the lungs and make it more difficult to breathe. The safest way to ensure good lung health is to stop smoking altogether. Once smoking stops, it’s possible to find relief for lung health problems and many health conditions may begin to clear as a result.

Serrapeptase is excellent for relieving inflammation in the lungs. It is a naturally occurring enzyme. It can dissolve the inflamed tissue that is causing the painful symptoms to develop. Once the inflammation dissolves, the body can naturally start to heal itself.

Thousands of people use Serrapeptase daily to find relief for their lung conditions and general health in the long term. Serrapeptase and a naturally healthy lifestyle that includes getting the important nutrients makes it possible to find significant relief for lung health problems. Following the Lung Health Plan here is recommended for best results.

Serra Enzyme™ 80,000IU is the Serrapeptase supplement available from Good Health Naturally. It can help to support the body’s natural healing processes. Serrapeptase helps in clearing the lungs of inflammation.  Serious lung diseases such as bronchiectasis, bronchitis, COPD are all results of unattended lung inflammation.

Read ‘Improving Lung Health in 30 Days‘ by Robert Redfern of Naturally Healthy Publications as this can provide guidance and support for anyone looking to improve their lung health condition.

My friend has just been diagnosedcwith pulmonary fibrosis. I wonder if serrapeptase would help

Hi Kathleen, yes we would recommend serrapeptase to help with the inflammation and scarring on the lungs. Please see our full plan for IPF, as this approach will help to get the best results. You can see the full plan here: https://www.goodhealthhelpdesk.com/index.php?/Knowledgebase/Article/View/1815/36/pulmonary-fibrosis-health-plan Please also contact the health coaches at Good Health Coaching Centres, for full support and guidance throughout the plan. It is completely free, so nothing to lose. Just register for a call back at http://www.MyGoodHealthClub.com and one of our health coaches will contact you shortly, so we can help your friend on a more individual basis. Your Good… Read more »